.There’s been no escaping the presence of rage in our country’s political life these days, and for many of us, no avoiding the rage in our own responses to events in the national news.

It’s not my first encounter with this emotion — an anger described as “the righteous fury of the unrepresented” in a Sept. 30 review in this newspaper of two new books on women’s anger. I encountered that fury in the 1970s with the defeat of the Equal Rights Amendment, and again this month in hearings that embroiled the nation.

So, I was ready for a fresh outlook on political anger when I met a group of local women who maintain that rage actually can be fun.

For the Raging Grannies Eugene, a partnership of humor and indignation fuels political activism and environmental concerns that emerge in songs instead of rants.

“It’s thrilling — to have a voice instead of sitting there frustrated,” confirms Pepi Barriger, 63. “I wanted a voice and the Grannies gives me a voice.”

“We are cheeky grannies who want to stand out,” says Laurie Granger, the organizing force behind the local “gaggle” of mature women who don colorful hats and billowing aprons to buttonhole listeners with songs of protest and persuasion.

“We use humor and outrageous glamour as non-confrontational vehicles to get people to think about the issues that affect all of Earth’s grandchildren,” says Granger, 74. “Our flowered hats, shawls and aprons invite people to stop and listen to what we sing.”

The group’s attention-rousing costumes turn the tables on traditional images of quietly docile grandmothers. Although they still bake cookies and dote on grandchildren, these grannies are anything but docile.

“Out of the rocking chair, into the fire,” asserts the motto that propels them into musical demonstrations, converting familiar melodies like “Pop Goes the Weasel” into a push to roust the ‘weasels’ from political office, or “The More We Get Together” into a denunciation of pipelines and fossil fuels.

“It feels fun,” says Eugenian Penny Palmer, 77. “We get to do something we feel strongly about and we have a lot of fun doing it.”

Who knew rage could be so entertaining?

On a recent Friday, I joined about two dozen Grannies at Eugene’s First United Methodist Church where the group meets. It was a quilting bee, a choir practice and a strategy planning session for the most ambitious commitment the 5-year-old Eugene group has tackled.

Their focus is the federal Our Children’s Trust lawsuit filed by 21 young people against the government for enabling climate changes they claim endanger their generation’s right to life, liberty and property.

With the trial, then set to begin Oct. 29 at the U.S. District Courthouse in Eugene, Grannies were preparing to provide a steady presence of support for the young plaintiffs. A U.S. Supreme Court ruling last Friday postponed the trial start date, pending further consideration, but has not dampened Granny commitment.

The cause is compelling to these Grannies. The quilt they are working on will hang behind a table at the front door of the federal courthouse, framing the faces of petitioners in the case. Grannies will deliver encouragement and homemade cookies when plaintiffs arrive and exit each day.

“I’m very behind what we are fighting for,” says Barriger, a retired Eugene elementary school teacher who views her work these days as preserving a livable future for the children she once taught to read. “It’s for them I want the planet to survive.”

Like many of the women who participate in Raging Granny demonstrations, activism is not new to Barriger. Neither is music. As a youth, she memorized songs of parody and sang them gleefully. Now her musical interest emerges as fresh lyrics that slip political protests into public domain melodies.

“I know that humor and song is a good way to get a point across,” she says. “It’s not crazy to get people to smile. People get tired of the seriousness.”

If the lyrics make light of political and environmental challenges, the issues and commitment are weighty.

“If I have a passion, it’s saving the earth,” says Penny Palmer. “I have always been haunted by climate change.”

A former public school teacher, math tutor and tax preparer, Palmer came to the Grannies with a pedigree of protest. In 2005 both she and a grandson were arrested in Washington, D.C., for refusing to leave an Iraq war protest at the gates of the White House.

“The best thing we are doing now is with Our Children’s Trust,” Palmer says. “It will be the youth that have to deal with what we leave. I feel grateful that we are working with 21 youth that are standing up and saying this is not OK.”

The Raging Grannies movement originated in Vancouver, B.C., in 1986 and now boasts more than 100 gaggles, as local groups are called, in Canada, the United States and six other countries. Information about local group activities is available at www.raginggrannieseugene.com.

Eugene organizer Laurie Granger’s introduction to the Raging Grannies came with an “ah ha” encounter at a 2012 health care rally in at the state capitol in Salem. The zany hats and the clever lyrics delivered at that rally by Grannies from Salem and Corvallis triggered immediate connection with a flock of like-minded women.

A former family therapist and director of family counseling programs for 22 years in Kingston, New York, Granger shrugs and admits she’s been an activist all her life, lobbying for families and livable communities.

Eight years ago she and her husband relocated from New York to Eugene to retire close to their three children and grandchildren. For Granger, the Raging Grannies provide a powerful sense of purpose as she receives treatment for metastatic cancer.

“It’s a reason to live,” she says. “You get to this point in life and you have learned many things. My whole life has brought me to this place where we can be strong support for Our Children’s Trust.

“People say, ‘I want to do something and I don’t know what to do.’ That’s bringing so many new Grannies now.”

This month, Grannies and supportive church groups in the area have plenty to do, baking grandmotherly love into enough homemade cookies to fill two freezers with nurturing treats for plaintiffs throughout a trial that is expected to last several weeks.

“Having kids and grandkids, that’s the most important thing I have done in my life,” says Granger. “That’s why Raging Grannies is so important to me. This is our legacy.”

Carolyn Scott Kortge of Eugene is a former Register-Guard editor and writer, and author of The Spirited Walker. Contact spiritedwalker@gmail.com. 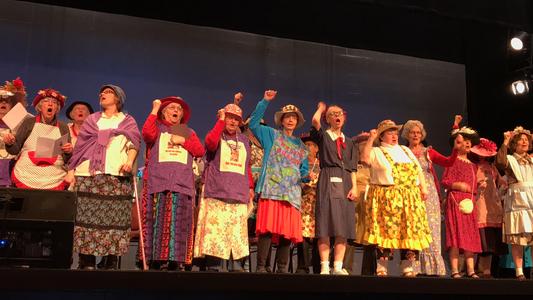 My "best" of this year is the Raging Grannies.  This group of indomitable, tuneful, passionate, cheerful and funny women appears almost monthly before the Eugene City Council.  They use their three minutes in the public forum to inspire us to action dressed in homemade costumes to sing familiar tunes with customized lyrics to meet the issue of the day.  They have urged us to ban coal trains, reduce our impact on climate change and divest from US Bank.  They represent the best tome of working hard for a better world while enjoying friendship, song, and silliness.

Not the Retiring Type: Who knew rage could be so entertaining?

PROUDLY PRESENTS THE STORY OF

"THE TRIAL OF THE CENTURY" 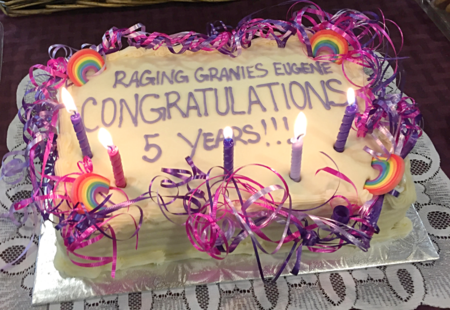 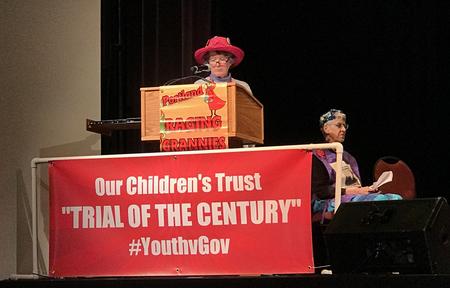 FIRST VERSE FROM OUR LAST SONG

"We're the Raging Grannies and we're here to speak our minds

about the threat of climate change, it's everywhere, we find.

We act because we must, to deserve Our Children's Trust,

We rage to save the world!" 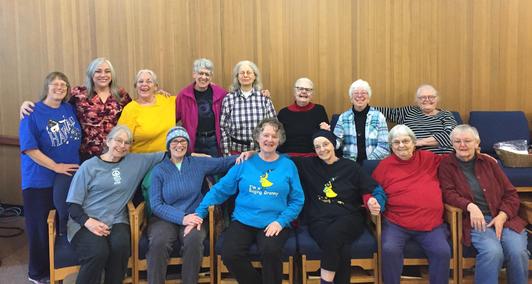 SECTION:  "I Dream...of THE BEST THINGS ABOUT EUGENE. 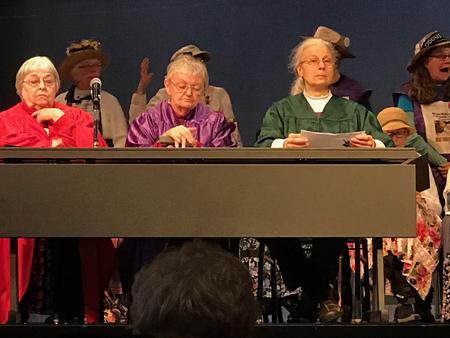 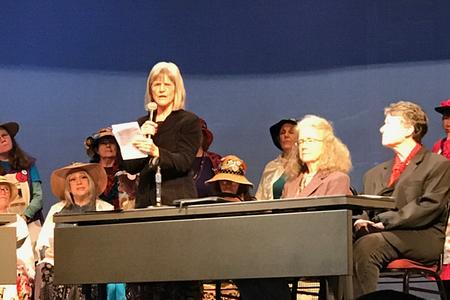 After the Trump administration’s decision
to exit the Paris climate agreement, many organizations and private citizens decided
to divest their money from banks that
finance pipelines and the fossil fuel industry
as a way to fight back.
Raging Grannies Eugene, Cascadia Action
Network, and 350.Eugene organized a direct
action to pressure REI, whose investments continue to support the fossil fuel industry.


IN THE BEGINNING... THERE WAS A PERFORMANCE BY THE CORVALLIS AND PORTLAND GRANNIES ON THE STEPS OF THE CAPITOL IN SALEM.

THE ISSUE WAS HEALTH CARE FOR ALL.

MARVELOUS!!!  SERIOUS AND YET WHIMSICAL!!!  UNIQUELY DRESSED!!!  GRANNIES TELLING IT LIKE IT IS!!!

AND SO THE BIRTH OF THE EUGENE GRANNIES!!!  AND ON MARCH 9TH, 2018, WE CELEBRATED 5 YEARS AS A GAGGLE!!!  WHAT GLORIOUS AND GIFTED GRANNIES HAVE COME TOGETHER, ALL WITH A PASSION

TO MAKE A DIFFERENCE IN OUR WORLD.

WHAT AN HONOR TO SHARE THIS JOURNEY WITH THEM!!! 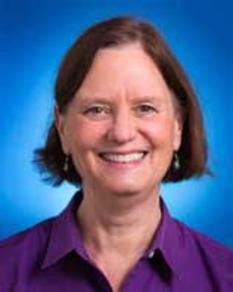 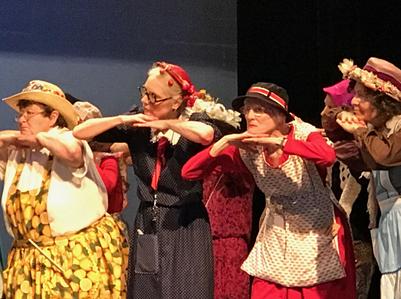